Living in the Land of Mosses

Rooftop moss (Dicranoweisia cirrhata) with capsules, each on the tip of a seta.

Orthotrichum, a common genus forming tufts on tree and shrub branches in the Pacific Northwest. 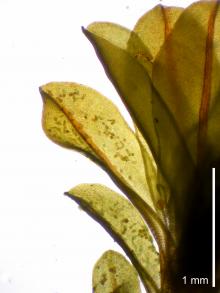 Leaves of the moss Syntrichia latifolia. The leaves are one cell thick. The brownish spots on the leaf surface are asexual reproductive bodies (gemmae). 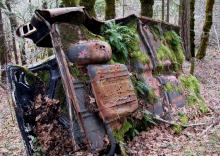 Old car body in the Oregon Coast Range being colonized by mosses and licorice fern (Polypodium). 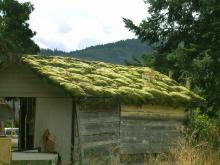 Mossy rooftop on a shed near Brownsville, Oregon. The roof hasn't been maintained or leaked for over 30 years. 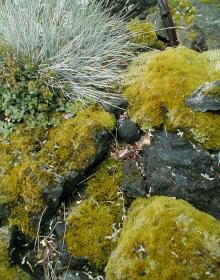 The moss Racomitrium on basalt boulders in a rock garden in the Willamette Valley, Oregon, with Sedum and Festuca in the background. 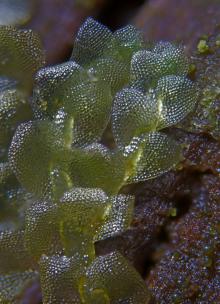 Calypogeia, a minute leafy liverwort. The leaves are about 1 mm wide.

Marchantia, a thalloid liverwort with umbrella-like female structures (lower left) and gemmae cups (center), which produce asexual reproductive bodies. One species of Marchantia is a common greenhouse weed, but others, such as the one pictured, occur naturally in moist environments in the Pacific Northwest.

By Bruce McCune and Kristen Whitbeck*

*Bruce McCune is a professor of Botany and Plant Pathology with Oregon State University in Corvallis, Ore. He can be reached at mccuneb@onid.orst.edu Kristen Whitbeck is a postdoctoral researcher living in Taos, NM, formerly a graduate student at Oregon State University and a contributor to the Living with Mosses website. She can be reached at kristen.whitbeck@gmail.com

If you read about “Spanish moss” smothering vegetation in Florida, you might develop a negative opinion about mosses in general. Although Spanish moss is not a moss (it is in the pineapple family), that same negative attitude seems to be common toward mosses in the Pacific Northwest. People have battled mosses for reasons that are more mythology than substance. Mosses deserve to have their side of the story told. This article clarifies what is, is not a moss, and answers some common questions about mosses.

When asked to visualize a plant, most of us picture an herbaceous plant such as a pansy, or a woody plant such as a Rhododendron. We think of “plants” as possessing roots, a stem (or trunk), flowers, fruits, and seeds. Few of us will picture the small opportunistic plants that grow on rocks, rooftops, concrete, and any other moist area. Their leaves are mostly only one cell thick; they have no true roots, flowers, or fruit; instead of seeds, they have spores. These are the mosses—the largest group of plants technically called bryophytes—the plants we see forming green carpets and cushions. Looking more closely, you might see thin wiry upright stems supporting a brown capsule that appears to be wearing a hat.

How do mosses reproduce and spread?

Mosses reproduce in several ways, but unlike flowering plants, they depend on liquid moisture to reproduce sexually, which allows the sperm to swim to the egg. Mosses disperse primarily by windblown spores, which are analogous to the flowering plant’s seed. Moss spores are, however, single celled and simpler than seeds. Spores develop in the brown capsule that sits on the seta. After spores mature, they form a loose, powdery mass, and then are dispersed from the capsule. With sufficient moisture at their landing site, they germinate and grow. At arm’s length, the young moss looks like a thin mat of algae. Up close it is a tangled mass of branching green filaments. These are easy to see on soil in almost any vegetable garden in the Pacific Northwest that has been fallow all winter. Next, buds will appear on the green filaments, from which tiny leafy shoots will grow. Some mosses have clusters of minute sausage-shaped organs that produce sperm—these are male plants. The female counterpart has eggs in bottle-shaped structures between her overlapping leaves. Water is needed for fertilization; allowing sperm to swim to the eggs by whipping their tails like the dickens. Yes, some plants can swim! The fertilized egg then produces the stalked brown capsule, which produces the spores, and the cycle continues.

Some mosses also reproduce and spread without sex—by specialized structures that readily detach and are dispersed by wind and water. Mosses also reproduce by fragmentation: fragments of the shoots or leaves can break off, move by wind or water, and start a new plant if moisture and other site conditions permit.

How do mosses acquire nutrients and water?

Mosses differ fundamentally from other plants in the way that they acquire nutrients and water. Most mosses derive the major portion of their nutrients and water from the atmosphere—dust and rainwater, rather than soil. Their need for nutrients is low. This allows them to grow on almost anything, including pure sand, junked cars, or other slow-moving hard objects, as long as there is adequate water at some time of the year. A few mosses, however, such as Polytrichum, obtain nutrients directly from the soil—then transfer the nutrients to their growing tips—just like higher plants. But these are the exception: the physical and chemical nature of the substrate is less important for mosses than the water balance of their environment.

Perhaps the most outstanding and important feature of the moss lifestyle is that most mosses can tolerate complete loss of water, then rehydrate, and pick up where they left off. It would be like going on a one-month summer vacation without watering your garden, then having your tomatoes come back to life when you resumed watering. Mosses are therefore opportunistic rather than demanding about water.

Where do mosses live?

Mosses can live anywhere from the Arctic to deserts to tropical forests. Mosses can be found on rocks, sand dunes, tree branches, cold creeks, hot springs, at the bottom of lakes, and among sagebrush. And of course, those of us who live in the Pacific Northwest know that mosses thrive in moist gardens and nurseries.

An opportunist in urban and agricultural environments, mosses grow on our trees, sidewalks, gardens, rooftops, and everywhere in between. The main requirement for a moss is sufficient moisture for at least part of the year. For example, the moist environment of a rooftop shaded by trees is ideal for mosses, even if it is dry for a few months per year. The rooftop will stay moist for long periods during much of the rest of the year, but during our dry summers these mosses dry out and become dormant. Wood and composite shingles make suitable homes for moss; slick metal roofs, however, are more difficult for mosses to colonize. Mosses in the Pacific Northwest flourish in the winter and spring when there is plenty of water, low to moderate light, and moderate temperatures.

What are mosses good for?

Mosses actually have many uses, from ecological to medical with a suite of common household uses in between. One of the better-known ecological uses of moss is as bioindicators of air pollution, such as those caused by factory or vehicle emissions. Because of their absorptive surfaces and reliance on atmospheric sources of water and nutrients, they are susceptible to most forms of air pollution.

Mosses reduce soil erosion on recently disturbed areas, such as roadcuts and herbicided ground (for example in Christmas tree plantations). Most mosses are relatively resistant to most herbicides. Some species, such as Funaria hygrometrica, are specialists on recently burned soil and colonize former burn piles and burned fields.

Mosses on rooftops and other hard surfaces in urban and suburban environments are doing us a hydrologic favor. By coating hard surfaces with an organic sponge that soaks up a lot of water, mosses provide hydrobuffering—reducing peak streamflows after storms. The myth that mosses on rooftops cause them to leak is overblown—they do not pry apart shingles. Unlike most other plants, they do not have true roots—but if higher plants take root in the moss mats, then the integrity of the roof can be compromised.

In moist environments, such as the Pacific Northwest, many mosses harbor cyanobacteria that convert atmospheric nitrogen into a form that can be taken up by other plants. This nitrogen fixation provides an important nutrient input into ecosystems that are limited by nitrogen.

Mosses, particularly peat mosses (mined deposits of dead Sphagnum moss) are heavily used in horticulture. Peat is used as a soil amendment for many reasons, including increasing water storage in sandy soil, improving soil structure and aeration in heavy soils, and improving retention of nutrients. Peat is a natural, weed-free organic matter.

Mosses are aesthetically beautiful and provide an attractive covering over soil and concrete surfaces that would otherwise be bare. We should feel lucky here in the Pacific Northwest that mosses grow easily, providing a diversity of texture and color among our gardens, rooftops, and sidewalks.

Like mosses, liverworts are bryophytes. Although mosses and liverworts are closely related, they do differ in some basic aspects of form and reproduction. Leafy liverworts look like mosses to the untrained eye, but thalloid liverworts are green, ribbon-like, branched plants, usually growing along the ground. Marchantia and Lunularia are two of the most conspicuous thalloid liverworts. From a horticultural perspective, liverworts play many of the same roles as described above for mosses. Thalloid liverworts, however, can be a problem in container nurseries that irrigate frequently, forming a continuous layer on the soil surface that can interfere with water penetration. Water drops striking the surface can splash the asexual reproductive gemmae from one container to the next. Liverworts are resistant to most herbicides, but keeping the soil surface as dry as possible and watering from below will reduce the colonization of containers by liverworts.

Although lichens often grow with mosses, and people commonly confuse them, they are quite different. Lichens are a mutualistic association between a fungus and an alga or cyanobacteria. Unlike mosses, they do not have a stem-and-leaf structure, and few of them are bright green or deep green. Rather, lichens come in shades of gray, cream, pale green, olive green, yellow, and orange. While people are sometimes concerned that lichens damage trees or shrubs, they extract nothing from their woody host; they simply use it as a growing surface.

Mosses add a rich, beautiful component to our landscaping, in many cases with no encouragement from us. Because mosses in the Pacific Northwest often arrive uninvited, some people have an automatic reaction that they are a problem. But a little knowledge and understanding go a long way to opening our eyes to the aesthetic and functional benefits of mosses. The next time you see the tufts of Orthotrichum on your Japanese maple, a mossy stone garden wall, a vibrant green mossy trunk, or the moss carpet in an area too shady to grow grass, consider opening your mind to welcoming these volunteers. Stop, look closely for a minute, and perhaps you will glimpse a minute green world that you have never really seen before.