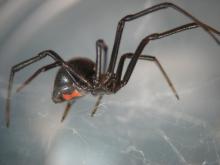 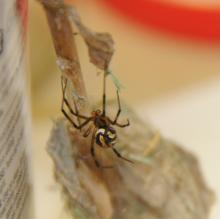 Male black widow spiders do not resemble adult females and are about 1/2 the size. 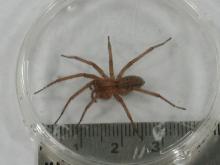 The bite of the hobo spider, Eratigena atrica, has been not been confirmed as poisonous, but may carry harmful bacteria on its fangs.  Any spider bite should be observed for signs of infection over the next few days.  See a primary physician if any puncture would appears to be infected.  Adult spider size is about 15 mm or 1/2 inch (without legs).

Pest description and damage Eight-legged animals of varying sizes and colors. Spiders are predators of insects: some spin webs but some-the hunters-chase and catch their prey. All spiders use venom to subdue their prey, but the effect of their venom on humans varies widely, from inconsequential to irritating to serious. Three spiders in the Pacific Northwest-the black widow and two species of sac spider-can inflict serious injury if trapped or disturbed. If bitten, seek professional medical attention promptly.

In the home, prevent spider and other arthropod infestations by sealing cracks and using tight fitting screens. Gaps under doors are good entryways for spiders. Inspect potted plants before bringing them indoors. Vacuum regularly and reduce clutter such as boxes, old furniture and papers that are not moved for long periods of time. Outdoors, wood piles, old boards, or other debris may harbor spiders. Wear gloves when handling firewood. Be cautious when entering unused areas like old barns, crawl spaces, attics, etc. Knock down webs whenever possible, and keep dense vegetation trimmed away from the building. Household pesticides labeled for spiders are commonly available. Successful treatment for spiders, even by a professional, generally only lowers the population around the structure but does not eliminate spiders completely. Glue traps can reduce spider populations indoors: place them where spiders are frequently seen.