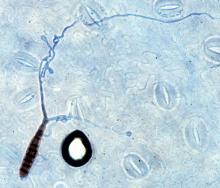 Conidium of Alternaria solani that has germinated on the surface of a potato leaf and formed several appressoria. (Dark elongate structure is the conidium while the dark circular object is an air bubble.)

Asexual spore formed by abstriction and detachment of part of a hyphal cell at the end of a conidiophore and germinating by a germ tube.