Early stage of light leaf spot on a volunteer Brassica. 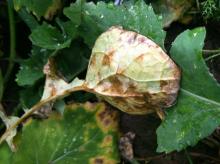 Turnip exhibiting classic light leaf spot symptoms on a leaf; note the olive brown discoloration on the underside of the leaf.

Cause The fungus, Cylindrosporium concentricum (sexual stage: Pyrenopeziza brassicae) has been found in Oregon on canola, turnip, volunteer or wild radish, wild mustard, volunteer black mustard, vegetable Brassica seed fields, and Brassica species used as cover crops during 2014; all brassicas crops grown in the Pacific Northwest are probably susceptible but the specific host range within Brassicaceae is unknown at this time. Oilseed rape and cauliflower are reported to be more susceptible than Brussels sprouts or kale, but there is a range of susceptibility within each crop species. Observations in western Oregon indicate that fall-planted turnip seed fields can be severely infected with chlorotic leaf spot, leading to plant die-out and severe stunting by the following spring. The pathogen has been a problem on oilseed rape in various parts of the world with seed losses estimated at 22% when outbreaks have occurred in the United Kingdom. This disease hasn't been previously reported in North America though an infected mustard field was found in western Oregon during 1998. Oilseed rape is very susceptible, and losses results from stand die-out, reduced pod numbers, premature pod ripening, or an overall growth reduction with less severe infections. Brassicas grown as vegetables in other areas of the globe, where this disease has been reported, suffer blemish defects by relatively mild infections, causing a decrease in quality but not of yield quantity. Trichloroacetic acid-based herbicides may increase plant susceptibility by affecting the waxy layer of leaves.

Ascospores develop from apothecia on infected plant residues and can be wind-dispersed relatively long distances after a wetting period, infecting susceptible plants. Asexual spores (conidia) develop but spread relatively short distances by rain or splashing water, potentially causing pod infections during the following spring. Seed can be infected or casually infested with the asexual stage yet seed transmission occurs at very low rates due to rapid die-out of the pathogen on seed. Still, epidemics can be initiated by seedborne inoculum or from neighboring fields of infected plants or residues, or from infected volunteers. Wet conditions and cool temperatures (around 60°F is optimum) promote disease development. Fall-infected plants may remain symptomless through the winter season till the following spring. Chlorotic leaf spot reappeared during late February in western Oregon, but ascospores probably began infecting during the previous October and November, possibly throughout the winter.

Symptoms This fungus can attack leaves, stems and pods. Flecking may be observed on cotyledons while leaf infections start as yellow patches that develop into irregular brown lesions with cracked centers, sometimes turning black. Veins surrounding young lesions often take on an olive-brown hue and may exhibit deformities. Leaf lesions can coalesce, causing death of leaves. When leaves are infected young, distortion can develop. Stem lesions are superficial, elongated brownish streaks with grayish-black margins and can be mistaken for black leg, except decay does not affect the stem pith. Flower infections may cause abortion. Pods infected early appear distorted while pods infected later result in relatively healthy-looking pods but will have white spore masses. Seedlings can be killed, or plants may be stunted.

If leaf spots are observed in a planting, foliar sprays will help to reduce the build-up within the field: