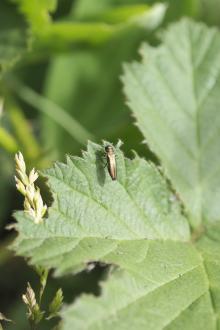 Pest description and crop damage Rose stem girdler (RSG) is a small copper green-colored Buprestidae family beetle pest of caneberry crops and ornamental brambles (Rosa and Rubus spp.). This pest is relatively new to the PNW and damage is increasingly being reported throughout the south Puget Sound basin to the Willamette Valley region of western Oregon. It has also been confirmed in the inland PNW. Infestations can reduce berry yield or kill canes. Damage patterns in infested regions or within fields may be highly variable and confined to certain "hotspots" where infestation is particularly heavy, and damage may be severe. Economic loss is most commonly reported in young plantings that are not yet well-established, and on primocane varieties grown for fall harvest. Damage to established floricane plantings can be a relatively inconspicuous yield decline, partially due to the infestation going unnoticed. If substantial girdling does not occur before harvest, RSG damage may superficially resemble typical cane senescence after harvest, or wilting from Phytophthora root rot. Canes with feeding damage are also more susceptible to winter injury. RSG may commonly begin to infest an area through infested nursery stock/transplants, or move incrementally through corridors where wild hosts are abundant. Wild Rosa and Rubus species abundance in the western PNW can lead to persistent RSG corridors along roadsides, railroad tracks, and waterways and RSG harbors in field peripheries, making eradication impractical.

Diligent, thorough pruning and destroying of RSG-damaged canes can help reduce field populations considerably (up to 80%). Insufficient field cleanup has been observed to lead to buildups of in-field pest populations even when insecticides are used. Larvae are unlikely to survive in canes if pruned out before late summer, but can remain viable in canes pruned after they reach their overwintering stage inside the cane pith. If these later-pruned canes are left in the field, they should thoroughly destroyed and/or tilled in below 2 inches to prevent emergence the following year. Generally, any production system where canes are absent when adults are active and/or where canes are mowed after infestation may lessen risk of in-field RSG issues in given year. Integrating effective insecticides with pruning practices may provide near-full control of in-field populations, though RSG may still enter fields annually from infested wild hosts in field edges. There are no insecticides specifically labeled for RSG control but a list of caneberry insecticides that are effective on RSG has been published in Utah State University Extension guide, ENT-178-15. Sprays need to be targeted at the adult beetles to prevent egg-laying. Insecticide applications made before adults emerge are ineffective. Growers may choose to prioritize new/young caneberry plantings and/or fall-harvest primocane varieties for chemical management if necessary. Scouting for RSG can be difficult because beetles are often not abundant enough to be easily spotted, but are most likely to seen on caneberry leaves between late May and mid-June in the western PNW. Once adults have emerged, weekly applications should be applied as full cover sprays, including the basal area of the canes, beginning immediately at adult emergence and continued while adults are present. Because adults can emerge around bloom, follow all pollinator guidelines that may appear on the pesticide labels.