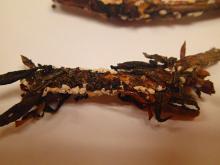 Pest description and damage The immature scale superficially resembles the mealybug in appearance. Mature female scale are about 0.13 inch long and appear like white cottony sacs, often located on twigs and stems of azalea, especially in branch axils. Eggs, crawlers and adults under the wax are red. Hosts include andromeda, azalea, rhododendron, hawthorn, poplar, willow, and most recently, blueberry in the Pacific Northwest.

Biology and life history The scale overwinter as an adult and lays eggs in the spring. The young scale (called "crawlers") are the mobile form of this scale; they migrate through the foliage to feed. As they feed and mature, they form a protective shell over their bodies. There is usually one, or possibly two, generations per year.

Pest monitoring Inspect twigs and tissues during the dormant season for scale insects. Pay attention to sickly plants and those with low vigor. The scale insect crawler is the stage most susceptible to chemical control. Monitor for crawlers by wrapping a piece of sticky tape around an infested branch with the sticky side out. The red crawlers are very small and best observed with a 10X magnifying glass.

Several species of beetles and parasitic wasps help control scale populations. Check beneath the waxy scales to determine if there is a live population. Avoid use of broad-spectrum insecticides, which can kill these predators.

Scrape scale off plants by hand with fingernail or toothbrush. Prune off major infestations. Apply double-stick tape near infestations of adult scale to catch the crawler stage. As with aphids, avoid excessive nitrogen fertilizer, as this favors population increase.