Smoke can be seen during the Columbia gorge fire of 2017. Particulates in smoke are not harmful to plants as they are to humans. 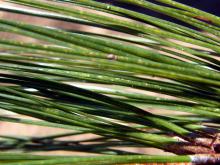 Chlorotic spots on onion leaves due to ozone damage. 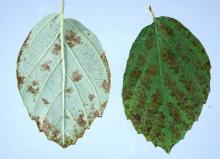 The leaf damage is unknown but ozone is suspected due to the distribution of symptoms on plants and leaves. Note the damage is worse on the upper leaf surface and between veins.

There is great interest in air quality all over the Western United States when smoke from forest fires fills valleys during the summer. Most of the smoke problem is due to small particulates, which are not known to damage plants. (Although smoke taint has been an issue in wine grape production.) Ozone, however, is known to damage plants. Ozone in the upper atmosphere protects us from damaging sunlight. It can also be used to sanitize irrigation water. But at certain concentrations for certain periods of time it can injure sensitive plants.

Ground-level ozone is called smog. Smog-forming pollutants are primarily generated by internal combustion engines and not smoke from forest fires. Traffic and activities in urban areas generate the most pollutants, but often the wind blows the pollution to outlying suburban and rural communities. Emissions of hydrocarbons and oxides of nitrogen in the morning combined with summer heat and intense sunlight in the afternoon to produce ground level ozone – smog.

Smog is a problem for the Portland-Vancouver and Medford metropolitan Oregon areas during the summer months. It is created most often on days when the temperature is 90°F or higher, especially when winds are light or non-existent.

All areas of Oregon currently meet the federal air quality standard for ozone. These levels, however, are based on human health. Sensitive plants can have problems when the ozone concentration is between 50–120 parts per billion (ppb)—120 ppb equals 12 pphm (parts per hundred million)—for extended time periods. The Eugene ozone monitoring station recorded at least 7 days during the summer of 2017 that met this requirement.

What are the most sensitive plants? The list is long but includes alder, begonia, blackberry, currant, dahlia, fuchsia, grape, lilac, milkweed, ninebark, Oregon Ash, Oregon Oak, petunia, Poplar (including aspen), radish, sequoia, snowberry, sycamore, tomato, and Tulip poplar. There can be wide differences in tolerance within a group or species where certain cultivars are more sensitive than others.

Ozone symptoms on plants usually occur between the veins on the upper leaf surface of older and middle-aged leaves but may also involve both leaf surfaces for some species. The cells of the palisade parenchyma of the most recently expanded leaves are the most sensitive to ozone injury. Tissue along the major veins usually remains unaffected.

For dicots exposed to high concentrations, symptoms may include bleaching, flecking, stippling, and interveinal necrosis. Less severe symptoms can include bronzing, chlorosis, and premature senescence of various plant parts. Monocots may show chlorotic or white-to-tan necrotic lesions or necrosis of the margin and/or tip of the leaf blade. Less severe symptoms can also include chlorosis and premature senescence. Severe conifer symptoms include needle banding where clear bands of chlorotic tissue develop and needle tipburn. Less severe conifer symptoms include flecking of older needles, mottling of younger needles and premature needlecast.

In grapes, it is referred to as “oxidant stipple” or “ozone stipple” and has been observed in Oregon. Symptoms of ozone damage appear predominantly on older grape leaves. Small interveinal spots (0.1mm–0.5 mm in diameter), occur only on the upper leaf surface. The lower-leaf surface does not show stipple symptoms but may show necrotic spots if symptoms are severe. Stipple may begin as a yellow color but is most commonly recognized when spots become brownish-bronze-to-dark-brown. Heavily stippled leaves may have a uniform bronze appearance from a distance and necrotic spots up to 2mm in diameter. The tissue in the veins surrounding lesions remains green. Affected leaves eventually drop from the vine. Growers may confuse this with spray damage.

The most common symptom of ozone damage on field-grown beans is bronzing, in which a purple-brown discoloration develops on the upper surface of the leaves. Bronzing on green beans has been observed in Oregon that could be due to ozone. The symptom was observed late in the season and could easily be overlooked since crops are senescing or have other diseases (such as powdery mildew). Symptoms of air pollution and/or ozone injury have been observed in multiple bean fields in central Washington, particularly in adzuki bean crops.

Many forest and landscape trees are also susceptible to ozone injury. Extensive injury was detected on forest ozone biomonitoring sites in California, with ponderosa and Jeffrey pines, mugwort, skunkbush, and blue elderberry showing injury. Little or no injury was detected in Oregon and Washington.

Symptoms of ozone injury on Ponderosa pine include a chlorotic-needle mottle, which develops from the tip to the base on older needles. These symptoms are followed by a necrotic-tip dieback. The oldest needles become senescent and turn a uniform-tan color. Normal needle retention is for 3-to-5 years but ozone-affected needles are cast prematurely leaving the chlorotic-mottled one-year-old needles on the tree. Eastern white pine is very sensitive where symptoms start with minute, silver flecks radiating from the stomata of current-year needles. These tiny flecks develop into larger chlorotic flecks. These may develop into pink lesion and bands that spread to the needle tips. Normal needle retention is for 3 years but the resulting needlecast leaves only current-season needles.

Ozone injury has not been observed on small fruit crops in the PNW.

Another common pollutant that forms from the incomplete combustion of fossil fuels is ethylene. This can be a problem for greenhouses and shipping containers where heaters are not properly vented. It also occurs when exhaust from vehicles idling outside a greenhouse drifts into plant production areas. Premature loss of flowers, epinasty, yellowing, and abscission of foliage are common symptoms.