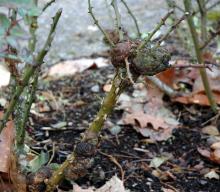 Note all the galls along the stem to the right. Many have started at pruning wounds.

Crown gall continues to be a major problem for the nursery industry, both in woody and herbaceous plants. The pathogen traditionally known to cause crown gall in the most plants is Agrobacterium tumefaciens (Rhizobium radiobacter). The pathogen name has been under dispute for decades, and A. tumefaciens is known to be a species complex, consisting of at least 11 different genomospecies. Here we will refer to the bacteria that cause crown gall as tumorigenic agrobacteria. Other species of Agrobacterium can also cause galls: A. rubi is much less common; named for the host in which it was first found (Rubus spp.), it has since been found in galls on rose, and will likely be found in other plants with time. Agrobacterium vitis (=Allorhizobium vitis) causes galls on grapevines. A. larrymoorei causes galling of Ficus benjamina, and has recently been found in rose galls. A novel gall-forming species, also isolated from rose, was recently described and named A. rosae. It is likely that additional species will be named in coming years, as bacteria associated with galls are examined more closely using modern molecular techniques. All of these species have a similar biology. This discussion covers the biology, host range, symptoms, and management of the disease.

Crown gall is a tumor-forming disease of plants caused by tumorigenic agrobacteria, many of which are thought to be present in most agricultural soils. The pathogens, in soil or on infested plants, are disseminated by splashing rain, irrigation water, heeling-in galled plants with healthy plants, farm machinery, pruning tools, wind, and plant parts used for propagation. Wounds are required for the pathogen to infect a plant. Wounds are made by pruning and cultivation, emergence of lateral roots, frost injury, and insect and nematode feeding. The pathogen colonizes the wound, attaches firmly to injured plant cells, and transfers part of its DNA into the DNA of the plant. Galls appear in a matter of weeks at temperatures above 70°F on herbaceous plants; woody plants such as roses may not show galls until months or years after exposure. Latent infections typically develop into galls in a later growing season. Pathogenic bacteria can be shed from the gall into the surrounding soil or water where they colonize or infect new plant tissues.

Although commonly reported to have a host range of hundreds, this information is based on artificial inoculations often of just a single isolate. On a practical basis, far fewer plants are naturally susceptible. (Examples of host plants infected by Agrobacterium are listed in Table 3.) However, the root systems of non-host plants such as weeds, grasses, and cereals can harbor the pathogen and serve as a reservoir of inoculum in natural settings.

The disease is called crown gall, but galling may be found at the base of cuttings, on roots, crowns, or on stems, canes, vines, or leaves. Leaf galls are usually found on herbaceous plants that have a systemic infection. (Herbaceous ornamental plants susceptible to crown gall are shown in Table 1.) Galls often occur at pruning wounds. Galls are usually rounded and may be smooth or textured like a cauliflower head. On woody perennial plants, galls become more woody and fissured with age, sometimes reaching a diameter of 6 inches, and girdling the stem. Galls on grapevines, blueberry, and bramble fruit are usually elongate, erumpent ridges of tissue bursting through the outer stem tissues.

Woody plants infected the first year they are planted out are more severely damaged. (Woody plants susceptible to crown gall are shown in Table 2.) Severely galled young plants are weakened, stunted, and unproductive and occasionally die due to an inferior root system. Literature reports of crown gall damage are contradictory; they range from benign to debilitating to deadly.

Symptoms become evident 2 to 4 weeks after infection if temperatures are at or above 68°F, usually coinciding with warmer soil temperatures in May or June. Initially, the galls look like callus outgrowths but then increase rapidly in size and number. Symptom development slows greatly below 58°F and stops below 50°F. Infection is inhibited above 92°F to 95°F. Latent infections are symptomless and usually occur when soils are cool. Gall symptoms typically develop at the infected wound the following season; on rare occasions galls don’t appear until the third growing season.

Some problems can look like crown gall but are not pathogenic. Aerial burr knot on apple tree trunks and branches is a cushion-like assemblage of adventitious roots; its cause is thought to be genetic rather than an infectious agent.

Small galls require careful diagnosis because they may be confused with excessive wound callus. Detection using molecular methods specific to plasmid gene regions involved with virulence, or isolation of bacteria later identified as pathogenic is necessary to confirm a crown gall diagnosis. Nonpathogenic Agrobacterium cells are often prevalent in these same tissues and can reach high populations. That makes diagnosis difficult, especially in galls on apple, blueberry, and grapevines where non-pathogens can constitute over 99% of the Agrobacterium population.

Pathogen-free plants grown in uninfested soil will not develop crown gall. This emphasizes the importance of planting clean propagating material in clean soil. Good sanitation and cultural practices are important deterrents to crown gall. Discard all nursery stock showing symptoms to avoid contaminating healthy plants and storage facilities. At harvest, leave noticeably galled plants in the field for later pickup and destruction. If possible, choose a rootstock that is less susceptible, avoid planting sites heavily infested by root-attacking insects and nematodes, disinfect pruning equipment between trees, and adopt management practices that minimize wounding. Avoid planting into heavy, wet soil. Don’t plant trees deeper than they grew in the nursery. If possible, incubate dormant seedling roots at 73°F to 76°F for 10 to 14 days to heal wounds and reduce susceptibility to tumorigenic agrobacteria before planting them in wet soil. Use irrigation water from wells, if possible. Avoid planting where galled plants grew in the last 4 to 5 years; choose fields that were planted recently to vegetables or grain. In summary, think prevention—avoid exposing plants to tumorigenic agrobacteria at any stage of plant production.

Crown gall is generally much more prevalent in heavy soils or in soil where water stands for a day or so. In New York, crown gall incidence was highest on a heavy clay knoll (15 ft elevation) from which water drained toward flat, loamy portions of the field. In Oregon, gall incidence on an Old Home x Farmingdale pear rootstock selection was severe (495 of 500 trees infected) in a heavy, wet soil, but in the same field only 1 of 500 trees was galled outside the wet area.

Cropping history can influence crown gall incidence. Budded apple trees became badly galled in fields where a previous nursery crop such as grape, peach, raspberry, and rose had been heavily infected. This situation isn’t repeated at every site, but we still recommend avoiding fields with a recent history of crown gall.

Reports of resistance in plants normally susceptible to crown gall are limited and depend on the strains of bacteria present in a given location. There are no reliable lists of cultivars with resistance that hold up in all geographic locations. It is better to select plants that are not susceptible in the first place if crown gall is a chronic problem in a particular field.

Using A. radiobacter K84, a biological control agent, has been very effective against crown gall on a number of hosts, but exceptions exist. Strain K84 produces a toxin against some tumorigenic strains of agrobacteria. This biological control is solely preventive, not curative; application timing is critical to properly protect plant wounds caused at harvest or by pruning. Htay and Kerr recommend seed and root treatment with K84 for best results. Not all strains of tumorigenic agrobacteria are sensitive to K84. For example, most agrobacteria isolated from grape tumors are A. vitis, which are insensitive to K84. If K84 has been used properly and galling persists, its use should be discontinued since it is likely the bacteria present are not sensitive to the product.

An improved, genetically engineered strain of K84 called K1026 is available. Its use is preferable, since the K1026 bacteria are not capable of transferring to other bacteria the genes that produce the toxin.

No registered chemicals that effectively control crown gall are currently available in the United States. In general, chemical preplant dips or soil drenches have been ineffective.

Fumigation to rid soil of Agrobacterium generally has been ineffective, and in some cases, growers reported more disease after fumigation.

Heat therapy has been tried in cherry and plum seedlings, and in dormant grape cuttings. Although these measures can reduce the incidence of disease, there will still be a small percentage of plants that remain infected. Time and temperatures needed for effective heat therapy has not been determined for many plants, and injury to the plant material can occur when temperatures are too high. Although promising, heat therapy is not commonly used due to these difficulties.

In solarization, a thin plastic film is stretched over moist soil to capture energy from the sun and heat the soil to temperatures that kill pathogenic microbes. Populations of tumorigenic agrobacteria could not be detected in a solarized sandy loam soil, but solarization did not work in the heavier silty-loam. Mazzard cherry seedlings planted later in solarized and in nonsolarized control plots developed crown gall only in the nonsolarized plots.

Following is a summary of the best practices for managing crown gall. They include experimental results and grower observations. Understandably, physical and economic constraints occasionally may impede applying all these practices. But for best results, follow or adapt the procedures as closely as possible to fit your management plan.

The following are specific procedures for commonly grown plants that can be used in addition to the above general procedures.

Aubert, B., Faivre Amiot, A., and Luisetti, J. 1982. Phytosanitary selection work in Reunion on some fruit trees with a low chilling requirement. Fruits 37:87-96.

Goodman, R.N., and Grimm, R. et al. 1993. The influence of grape rootstocks on the crown gall infection process and on tumor development. American Journal of Enology and Viticulture 44:22-26.

Ishizawa, Y., and Kyotani, H. et al. 1992. Methods for evaluating the degree of crown gall resistance and the varietal differences in peach. Bulletin of the Fruit Tree Research Station 23:37-46.